In the Book of Imaginary Beings, there's a entry which briefly treats the existence of spherical animals. Borges recounts Plato's beleif on planets and stars as living beings. Later, he says, Renaissance men would discuss the possibility of Earth as an organism far superior than animal and plant forms; a serene behemoth. Almost thirty years ago, Stephen King chronicled the story of two cosmonauts lost in a planet constituted by living sand.
I've stumbled upon a wide family of globular critters slightly bigger than a golf ball. As appointed by Plato, their movement is spontaneous and voluntary. They bounce and roll cheerfully in space without acknowledging anyone's or anything's pressence. I'll be referring to this round species as orbs. 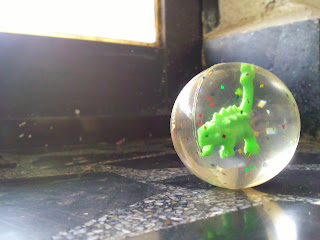 This entry's exhibited specimen is not the initial orb encountered, but the first one that I was able to photograph and file adequately. It ressembles a limpid-green ankylosaurus surrounded by a petrified rain of multicolored diamonds.
In Flatland: A Romance of Many Dimensions, a square describes its vision of a lower universe inhabitted by a single point which believes itself to be the only existing being (pitiful). Considering the orb's behaviour, it would not surprise me if  it perceived this existential plane as an accidental consequence of its own frame.
Maybe I'm the one who's unable to perceive the prehistoric lizard's surrounding space. Perhaps the orb is only a clairvoyant's  decomposed crystal.
Publicado por César Cantú en 17:32 No hay comentarios:

"Life in a bubble jungle"

When human beings realized their home planet was minuscule, they felt lonely and wondered about what might exist somewhere in the Solar System. Soon the Solar System grew small, so humanity wondered about what might exist somewhere in their galaxy. Then the galaxy became small too, so humanity wondered about what might exist in nearby galaxies (once fantastically called "island universes"). The galactic neighbourhood turned diminutive with the discovery of countless others, so humanity wondered about what might exist somewhere in the vast universe. Somehow the universe grew limited too, and another possibility was projected: What lies beyond such limits? The historical answer: more of the same. Thus humanity wondered about what might exist somewhere in the unquantified number of universes.
For aesthetical purposes, lets imagine every universe, with its variations and singularities, as a bubble hoovering in existance among other bubbles. To clarify the intended image, we'll call the whole perplexing set a "bubble jungle" (a borrowed expression, it should be pointed out).
It is expected that phenomena and creatures pertaining to a specific bubble remain within its limits, yet my experience (and that registered by so many others before me) indicates otherwise.  Entities from what can only be other realms of existance roam the corners of this one like confused apparitions which vanish back to their homeworld after some time. Most of them are relatively small, which might be due to a reconfiguration that happens during the jaunt. I wonder if I've been involved in similar journeys without being able to recall the incidents.
This humble publication will operate in a way similar to Borges's Book of Imaginary Beings or any other Bestiarum vocabulum for that matter. I'll do my best to keep a constant record of the irruptions through short, essential entries and provide images of whichever creature invades my immediate space.
Publicado por César Cantú en 17:49 No hay comentarios: